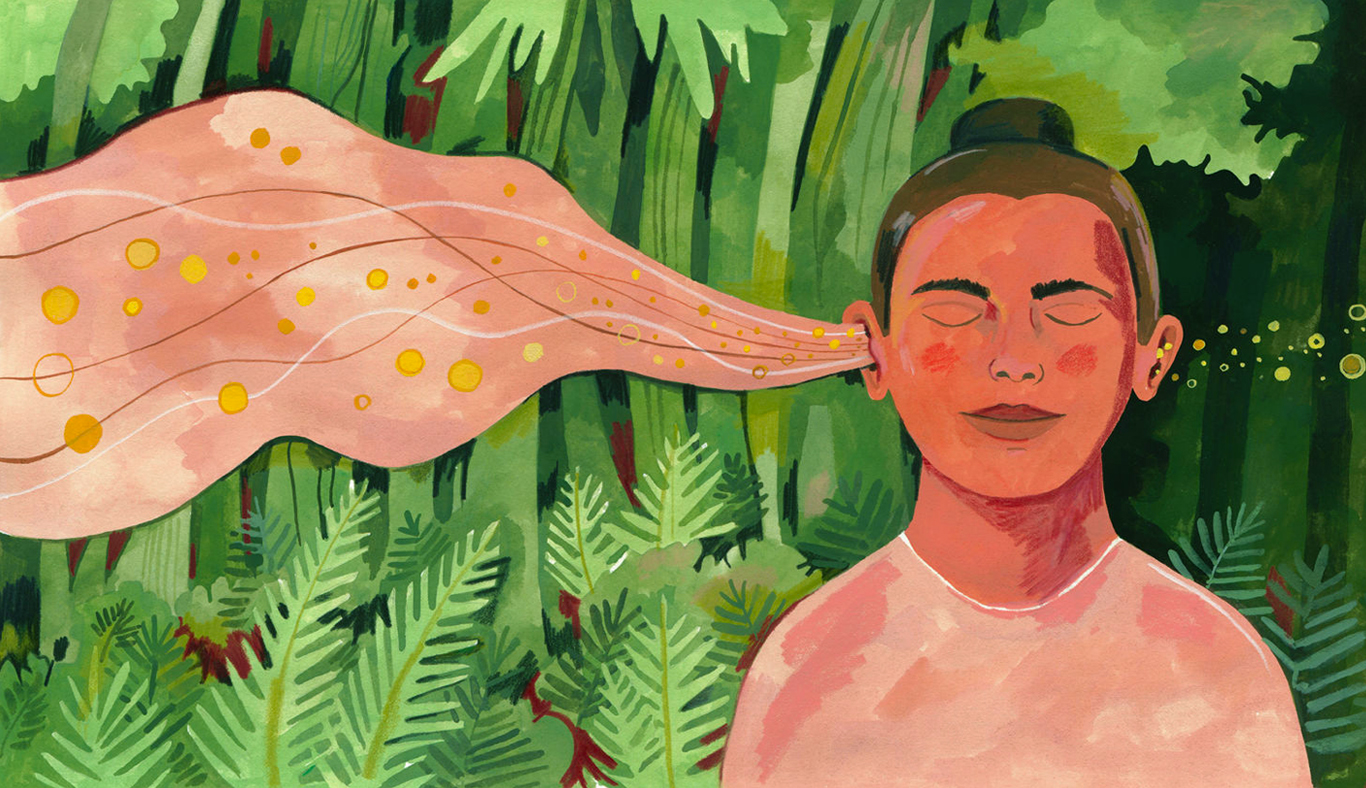 Thank you so much for the Brahman contemplation on Mandukya Upanishad, it has opened up an amazing open-eyed meditation for me – https://www.youtube.com/watch?v=scKepUN7nlM

The 2nd Mandukya self-inquiry Aum meditation – https://www.youtube.com/watch?v=qpuZFH2j3m0 made me realize that sound has been with me my entire life. As a child, in the winters in Ohio, I remember my sister & I, laying in the snow making snow angels. We lived in the country & it was quiet, especially with snow thick on the ground & flurries dampening the sounds. When I would stop and lie still, I distinctly remember a ringing in my ears getting more & more pronounced as I stared, into the vast white clouded sky. It was the same ringing & feeling I get while meditating in front of the wall with the 2nd AUM video. I of course grew out of snow angels & forgot about that experience until 2 years ago when my awakening began. I started to meditate twice a day, in silence, usually focusing on my breath or my heartbeat. And when I did this, I started to notice the ringing again after over 40 years. I used google to research & determine it was NOT tinnitus, as it was not always present, & it didn’t bother me in the least bit. I saw an article that said some Buddhist monks refer to it as the sound of silence & focus on it during meditation. Is it called Naad Yoga? Anyway, since then I have taken notice more & more throughout my day. Especially when I listen for it, or I am in a quiet area. It seems present all the time but doesn’t bother me & only catches my attention occasionally when I’m involved in other activities. I am astounded at the answers I continue to receive, to questions I have had my entire life! Thank You So Much Didi for this knowledge!

Yes, it is called Anhad Naad Yoga. It is taught in stages:

Then the real meaning of ‘Anhad Naad’ becomes clear. ‘Anhad’ means that which is not bound by time and space. Naad means vibration. It is the vibration of infinity, a soundless sound. That is why the Buddhists call it the sound of silence.

In our sangha of spiritual practitioners [Gnyana Sangha], we attempt to not just use the Naad merely as a tool to calm down the mind. That is the level of Srishti Drishti Vaad [Creation precedes Consciousness] level.

Instead, we attempt to walk the path of Advaita, experientially NOT intellectually, all the way to Ajaata Vaad [Creation is unborn] level. When one recognizes that there is only the Pure Consciousness, there is no creation, the creation never was, he attains the last level of recognition of ‘Ajaata Vaad’. He sees the truth that just like the tiger in the dream state is a temporary illusion unavailable in the waking state, similarly the world of people, situations & things is a temporary waking state illusion unavailable in the dream & deep sleep states. Diving further in one realizes that there was still I-the-Awareness that is common to all the 3 states and knows the appearance and disappearance of the 3 states. The final Aho moment brings forth the truth that that which is beyond all 3 states is who I truly am.

Only by this recognition is it possible to let go of the illusory suffering… remember illusory suffering is not holding onto you, it cannot hold on to you, you are holding onto a temporary illusory belief labelled by the body-mind as suffering. Wake up and see this simple truth that you are Anhad [infinite] yourself! That is the true purpose of the Anhad Naad!

May all be free of suffering! There is no higher bliss!

P.S. You can read more on Naad on Wikipedia – https://en.wikipedia.org/wiki/N%C4%81da_yoga